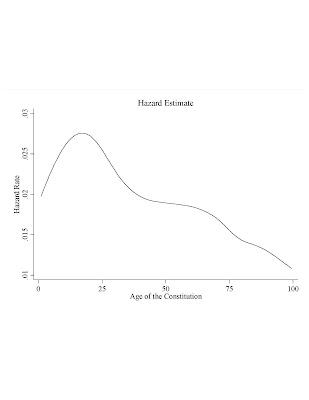 The convenant binding two people “til death do [them] part” seems to have much in common with constitutions. Both contracts are highly symbolic and probably confer some degree of legitimacy upon unions that will inevitably weather their fair share of crises. Both contracts, when entered into, are thought to last indefinitely. We can continue to be optimistic about any given union, but we know many of them are doomed to come apart.
But how do the rates of divorce and constitutional replacement compare? Here I present some evidence from a book that Tom Ginsburg, James Melton, and I have just finished entitled The Endurance of National Constitutions (due out next month). [Tom and I hope to serialize some of the highlights from the book here in the next few weeks].
The figure above plots the hazard estimate of constitutional death, which is the probability of death conditional on having lived to a given age. The figure, then, charts the risk of death at various points in the life cycle of a constitution.
Here’s some of our discussion of these patterns from Chapter Six of the book:

As it happens, the shape of the hazard rate for constitutional dissolution
seems to mirror that of marriage dissolution, at least in some cultures. With
data on Norwegian couples, for example, Aalen and Gjessing (2001)
show that the risk of divorce is low in the first one or two years of marriage
(roughly 1 of 1,000 couples will divorce) but the divorce rate rises steadily
until age six, when it peaks (the peak rate differs by era, but for couples
married in 1980 the rate was 22 in 1,000), and then decreases gradually with a
trivially small uptick in the divorce rate after twenty years. In the case of
constitutions, the hazard rate takes longer to reach its peak at age fifteen
(where it sits at roughly 27 deaths per 1,000) but then decreases steadily and
substantially until by age fifty the rate is approximately .02, or 20 deaths per
1,000 constitutions. Curiously, not only does the shape of the hazard rate match
across the two domains, but the hazard rate itself is almost equivalent when
both rates are at their peak. For the many scholars who have found the marriage
covenant to be a useful analogue to the constitutional one, these results
provide more ammunition.